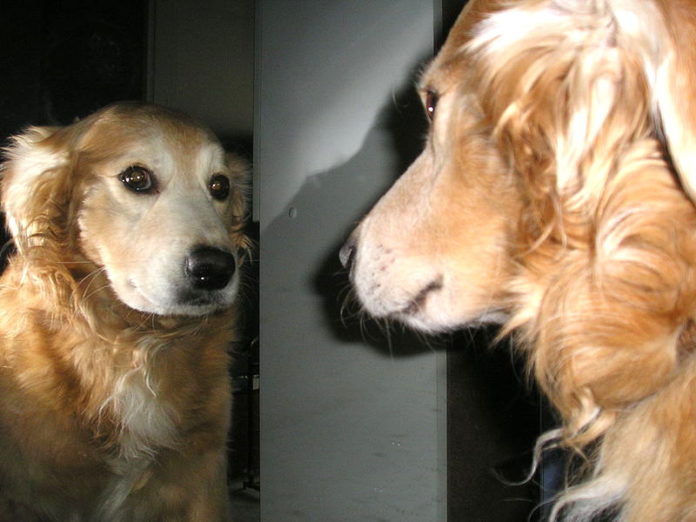 A new research carried out by the Department of Psychology of the Barnard College in the USA, in publication on the journal «Behavioural Processes» (Horowitz, A., Smelling themselves: Dogs investigate their own odours longer when modified in an «olfactory mirror» test. Available online: 7 August 2017), used a sniff-test to evaluate the ability of dogs to recognize themselves.
The experiment confirms the hypothesis of dogs’ self-cognition proposed last year by Prof. Roberto Cazzolla Gatti of the Biological Institute of the Tomsk State University, Russia (Cazzolla Gatti, R. (2016). Self-consciousness: beyond the looking-glass and what dogs found there. Ethology Ecology & Evolution, 28(2), 232-240).
Dr Alexandra Horowitz, the research’s leader, wrote in her report: «While domestic dogs, Canis familiaris, have been found to be skillful at social cognitive tasks and even some meta-cognitive tasks, they have not passed the test of mirror self-recognition (MSR)».
She borrowed the pioneering ethological approach, called the «Sniff test of self-recognition (STSR)» proposed by Prof. Cazzolla Gatti in 2016 to shed light on different ways of checking for self-recognition, and applied it to thirty-six domestic dogs accompanied by their owners.
This study confirmed the previous evidence proposed with the STSR by Dr Cazzolla Gatti showing that «dogs distinguish between the olfactory “image” of themselves when modified: investigating their own odour for longer when it had an additional odour accompanying it than when it did not. Such behaviour implies a recognition of the odour as being of or from “themselves”».
Prof. Cazzolla Gatti firstly suggested the hypothesis of self-cognition in dogs in a 2016 pioneering paper entitled after the novel by Lewis Carroll «Self-consciousness: beyond the looking-glass and what dogs found there».
As the Associate Professor of the Tomsk State University anticipated: «this sniff-test could change the way some experiments on animal behaviour are validated». Soon, the study of Dr Horowitz followed.
«I believe that dogs and other animals – declared prof. Cazzolla Gatti last year in an interview for the Daily Mail, UK – being much less sensitive to visual stimuli with respect to what, for example, humans and many apes are, cannot pass the mirror test because of the sensory modality chosen by the investigator to test the self-awareness and this in not, necessarily, due to the absence of this cognitive ability in some animal species».
Prof. Cazzolla Gatti’s idea, as recently confirmed by Dr Horowitz on a larger samples of dogs, shows that «the sniff test of self-recognition (STSR) even when applied to multiple individuals living in groups and with different ages and sexes, provides significant evidences of self-awareness in dogs, and can play a crucial role in showing that this capacity is not a specific feature of only great apes, humans and a few other animals, but it depends on the way in which researchers try to verify it».
The innovative approach to test the self-awareness highlighted the need to shift the paradigm of the anthropocentric idea of consciousness to a species-specific perspective.
As the Italian biologist of the Tomsk State University anticipated last year in his paper: «We would never expect that a mole or a bat can recognize themselves in a mirror, but now we have strong empirical evidences to suggest that if species other than primates are tested on chemical or auditory perception base we could get really unexpected results».
This new study published in the journal Behavioural Processes, validating the sniff test of self-recognition (STSR) and the hypothesis of a self-awareness in dogs and other animals developed by Prof. Roberto Cazzolla Gatti, pushes furthermore ethologists to move «beyond the looking-glass to see what other animals can found there».