Trump has not stopped the fast decline of coal-fired power and the rise of renewables. Indeed, despite the weakening of the Clean Power Plan, the US power sector looks set to overachieve the CPP’s emissions reduction goals

The Trump Administration’s intended withdrawal of the US from the Paris Agreement and its rollbacks of domestic climate policy will leave US greenhouse gas emissions at least 3% higher in 2030 than with the policies still in place. Nevertheless, the CAT projects US emissions to be 2% lower than what we projected when Trump came to power, which is 13% below 2005 levels.

Trump has not stopped the fast decline of coal-fired power and the rise of renewables. Indeed, despite the weakening of the Clean Power Plan, the US power sector looks set to overachieve the CPP’s emissions reduction goals.

The Administration’s activities also significantly affect greenhouse gas emissions outside of the US through boosted gas exports. However, fears that it would lead to an avalanche of countries withdrawing from the Paris Agreement have proven unfounded.

On 1 June 2017, President Trump announced that the United States would pull out of the Paris Agreement. This was the first major step in his campaign to systematically walk back US federal climate policy, weakening efforts from the previous administration to reduce greenhouse gas (GHG) emissions.

Under the rules of the Paris Agreement, 4 November 2019 is the earliest date the Trump administration can officially submit a request to withdraw from the accord. This would go into effect exactly one year later, one day after the 2020 US presidential elections.

If the Trump administration sends the formal request to withdraw from the Paris Agreement, as it has indicated it will do on Monday, this would be a significant addition to the series of rollbacks in climate policy that could increase GHG emissions.

This comes as the USA is grappling with extreme events that are intensified by climate change, such as the devastating wildfires in California (Williams et al., 2019), with power cuts for over two million people – and storms on the east coast.

The Trump Administration has put forward over 50 rollbacks targeting climate policy (The New York Times, 2019a). The list below presents selected rollbacks, completed and in process, that could lead to increase of GHG emissions.

Despite this large number of policy rollbacks, the implemented and planned quantified policy rollbacks under Trump administration will lead to 2030 greenhouse gas emissions only 3% (186 MtCO2e) higher than the CAT’s projection with these policies still in place. The CAT’s total projection for 2030, including accounting for implemented the Trump rollbacks, is now 2% lower than we had estimated in 2016 when Trump took office, with a reduction of 13% below 2005 levels by 2030.

Two opposite effects can be observed, which cancel each other out. The increased emissions from the rollbacks have been largely compensated by a lower emissions projection in the electricity generation sector, due to a changing power generation mix, with increased use of gas and cheaper renewables, which is continuing to displace coal (U.S. Energy Information Administration, 2019).

The market forces of cheaper renewables and gas have put coal-fired power producers under economic pressure, with eight of them filing bankruptcy this year (The New York Times, 2019b). Such market forces are reflected in current projections, which show that even though the Trump Administration replaced the Clean Power Plan (CPP), the power sector will still overachieve the CPP’s original target of reducing emissions 32% below 2005 levels by 2030. So even though the Trump Administration has tried to reverse this trend it has not succeeded.

Other significant rollbacks include not enforcing a regulation of efficient lighting, regulation on fluorinated greenhouse gases, postponement of energy efficiency and emission standards for cars and not enforcing the mandatory repair of gas leaks (see table below, and list below that of rules we didn’t quantify).

It is equally worrying that emissions outside the US might increase due to the significant support for fossil fuel production and exports in the US, mainly from unconventional gas through fracking. The US is now the world’s largest producer of crude oil and gas (U.S. Energy Information Administration, 2018).

LNG exports grew by 53% from 2017-2018, and are expected to more than double by 2020 (Lester, 2019). The US is incentivising the development of new gas-related infrastructure (LNG ports and pipelines) overseas to expand its export market (U.S. Trade and Development Agency, 2017).

This significant investment into large-scale gas infrastructure will lead importing countries to a lock-in of their energy supply into a fossil-dependent pathway that is not compatible with the Paris Agreement’s temperature goal. The lock-in of those technologies are also very likely to result in stranded assets (Climate Action Tracker, 2017a). 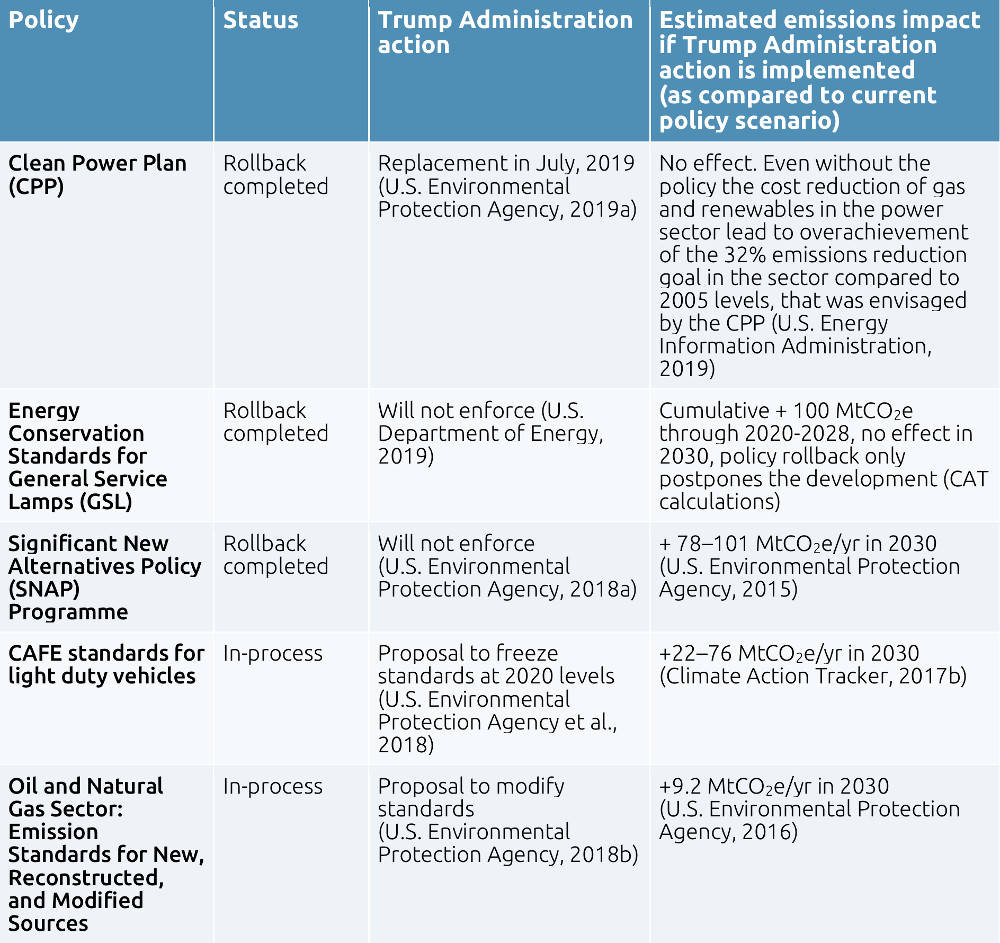 Additional relevant rollbacks that we don’t quantify include:

The Climate Action Tracker is an independent scientific analysis that measures government climate action against the globally agreed aim of holding warming well below 2°C, and pursuing efforts to limit warming to 1.5°C. It is a collaboration of the following organisations:

Climate Analytics
Climate Analytics is a non-profit organisation based in Berlin, Germany, with offices in Lomé, Togo, New York, USA, and Perth, Australia that brings together inter-disciplinary expertise in the scientific and policy aspects of climate change. Its activities include: synthesising and advancing scientific knowledge in the area of climate change science, policy and impacts; providing science and policy support to the Least Developed Countries and Small Island Developing States in international climate negotiations, and the tracking and analysing the effectiveness of national climate policies globally.

Ecofys – Experts in Energy
Ecofys, a Navigant company, is a leading international energy and climate consultancy focused on sustainable energy for everyone. Founded in 1984, the company is a trusted advisor to governments, corporations, NGOs, and energy providers worldwide. The team delivers powerful results in the energy and climate transition sectors. Working across the entire energy value chain, Ecofys develops innovative solutions and strategies to support its clients in enabling the energy transition and working through the challenges of climate change.