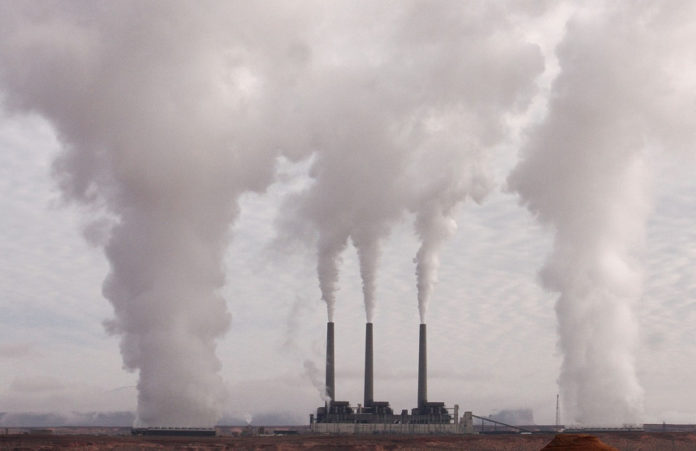 Geneva, 6 November 2013 – The amount of greenhouse gases in the atmosphere reached a new record high in 2012, continuing an upward and accelerating trend which is driving climate change and will shape the future of our planet for hundreds and thousands of years.
The World Meteorological Organization’s annual Greenhouse Gas Bulletin shows that between 1990 and 2012 there was a 32% increase in radiative forcing – the warming effect on our climate – because of carbon dioxide (CO2) and other heat-trapping long-lived gases such as methane and nitrous oxide.
Carbon dioxide, mainly from fossil fuel-related emissions, accounted for 80% of this increase. The atmospheric increase of CO2 from 2011 to 2012 was higher than its average growth rate over the past ten years, according to the Greenhouse Gas Bulletin.
Since the start of the industrial era in 1750, the global average concentration of CO2 in the atmosphere has increased by 41%, methane by 160% and nitrous oxide by 20%.
What is happening in the atmosphere is one part of a much wider picture. Only about half of the CO2 emitted by human activities remains in the atmosphere, with the rest being absorbed in the biosphere and in the oceans.
“The observations from WMO’s extensive Global Atmosphere Watch network highlight yet again how heat-trapping gases from human activities have upset the natural balance of our atmosphere and are a major contribution to climate change,” said WMO Secretary-General Michel Jarraud.
“The Intergovernmental Panel on Climate Change (IPCC) in its recent 5th Assessment Report stressed that atmospheric concentrations of carbon dioxide, methane, and nitrous oxide have increased to levels unprecedented in at least the last 800,000 years,” he said.
“As a result of this, our climate is changing, our weather is more extreme, ice sheets and glaciers are melting and sea levels are rising,” said Mr Jarraud.
“According to the IPCC, if we continue with ‘business as usual,’ global average temperatures may be 4.6 degrees higher by the end of the century than pre-industrial levels – and even higher in some parts of the world. This would have devastating consequences,” he said.
“Limiting climate change will require large and sustained reductions of greenhouse gas emissions. We need to act now, otherwise we will jeopardize the future of our children, grandchildren and many future generations,” said Mr Jarraud. “Time is not on our side,” he added.
The WMO Greenhouse Gas Bulletin reports on atmospheric concentrations – and not emissions – of greenhouse gases. Emissions represent what goes into the atmosphere. Concentrations represent what remains in the atmosphere after the complex system of interactions between the atmosphere, biosphere and the oceans.

Methane is the second most important long-lived greenhouse gas. Approximately 40% of methane is emitted into the atmosphere by natural sources (e.g., wetlands and termites), and about 60 % comes from human activities like cattle breeding, rice agriculture, fossil fuel exploitation, landfills and biomass burning.
Atmospheric methane reached a new high of about 1819 parts per billion (ppb) in 2012, or 260% of the pre-industrial level, due to increased emissions from anthropogenic sources. Since 2007, atmospheric methane has been increasing again after a temporary period of levelling-off.
In a special section on methane, the bulletin said that there has not yet been a measurable increase in Arctic methane due to melting of the permafrost and hydrates. It said that the increase in global average methane levels was rather associated with increased emissions in the tropical and mid-latitude Northern Hemisphere. Attribution of this increase to anthropogenic (human-influenced) or natural sources requires better coverage and more sophisticated observations in the atmosphere which are currently not available.

Nitrous oxide is emitted into the atmosphere from both natural (about 60%) and anthropogenic sources (approximately 40%), including oceans, soil, biomass burning, fertilizer use, and various industrial processes. Its atmospheric concentration in 2012 was about 325.1 parts per billion, which is 0.9 parts per billion above the previous year and 120% of the pre-industrial level. Its impact on climate, over a 100-year period, is 298 times greater than equal emissions of carbon dioxide. It also plays an important role in the destruction of the stratospheric ozone layer which protects us from the harmful ultraviolet rays of the sun.

Yes to research, but we’re not guinea-pigs

Graziano Pesole - 4 Marzo 2009
Title: Yes to research, but we're not guinea-pigs Abstract: How a GMO is born. The expression of new proteins or the alteration of the levels of...

Gianni degli Antoni - 1 Giugno 2010
Title: Youth’s future Abstract: What is awaiting them. Richard Lessing warns constitutionalists: beware, there are two constitutions, the historical one and the one based on the...