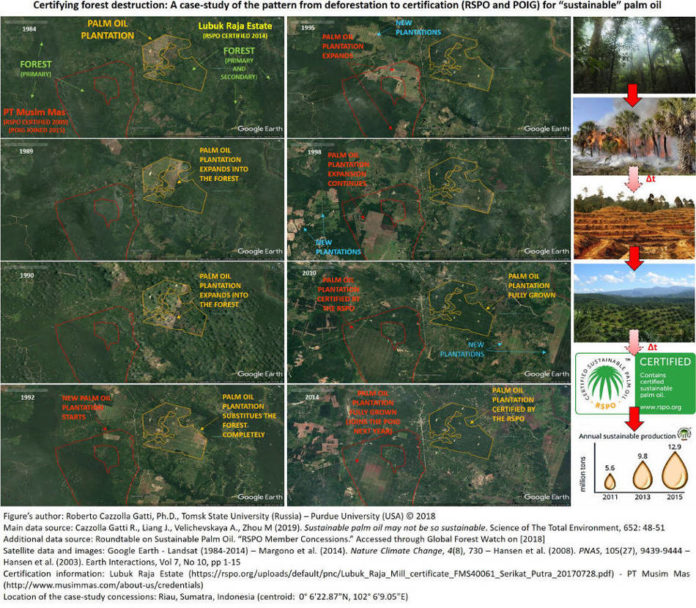 Our recent scientific paper entitled «Sustainable palm oil may not be so sustainable» raised an interesting debate on the actual sustainability of certified palm oil and received much appreciation from the public opinion and some conservation organizations. It was widely covered by journals and newspapers, but was also strongly attacked by interested certifiers (like the RSPO) and other groups involved in the palm oil business.

I personally received several emails arguing that, with our scientific study, we were disseminating a wrong message to the public opinion on the sustainability of palm oil. I was amazed to discover that one of the U.S. Representative at Roundtable on Sustainable Palm Oil (RSPO) who immediately criticized our study, highlighting flawed points in an extreme attempt to defend their certification scheme, before being hired by the RSPO, worked as a Senior Manager at PepsiCo (which is one of the major brands controlled by the RSPO itself and repeatedly accused of destroying the forests for palm oil – so it’s like the inspector who worked for the inspected) and he was also a former manager of the Asian Paper & Pulp (whose reputation precedes the company’s name).

This was very alarming to me because it would represent a typical case of conflict of interests. Moreover, this says much on how certifiers works and can be trusted, and illustrates the pressure that some corporations are making on scientists and science that show the evidence of the unsustainability of this whole system.

The critics opposed our results because, in their opinion, the tree cover loss data referred to in our study did not differentiate between planted (including clearing of old oil palm for replanting) and natural forest cover.

However, this was not a point. In fact, before starting our study, we were also concerned about distinguishing tree loss from forest loss, so we compared the Landsat-calibrated and MODIS-derived forest extent data of the forest cover for year 2000 and the tree loss data within the concessions. We found out that more than 98% of the current certified and non-certified palm oil concessions are located in previously forested areas (1990-2000) and, therefore, we assumed that during our study period (2001-2016) tree cover loss was mainly (but we can even say «only») due to forest loss (similarly, tree cover gain is mainly due to new palm oil plantations). Therefore, there was no reason to actually discriminate forest and tree loss, even if we clarified in our paper that in the studied areas tree loss can be also due to fires or other tree damage, and not only to deforestation. However, these non-deforestation causes represents a minimal and insignificant percentage of the actual forest loss.

Moreover, we also assumed that, considering the lifespan of a palm oil plantation of 20-30 years before the palms are too tall or too old to be replaced all together to establish a new plantation, and that our time-series considered just the last 15 years of forest (tree) loss, we have no reason to believe that a continuous tree loss (every year) in the same area, where a concession is currently located, can be attributable to the replanting of a whole plantation, which would happen only once in a 15-year time frame, at maximum. If tree loss were due to plantation management (i.e. clearing and replanting of a palm oil plantation), we would have seen a peak of tree loss just in one or a few years (during the 15 years considered) and, then, an almost zero tree loss for many years. This is not what we saw in our study, because we detected a continuous forest (tree) loss during the last 15 years in the current palm oil concession and we consider unrealistic that a plantation can be every year, totally or partially, cleared and replanted.

Of course, there are no reasons to protect an area anymore once it is damaged (particularly if a government lacks land use records), so a new concession can be easily allocated. This is a common trick that we tried to unmask with our study.

Nevertheless, our paper was a short communication to present our preliminary findings and this is why we avoided reporting all details (for methodology and results). We are currently working on a more detailed paper. In the meantime, to refute any shameful attack on the reliability of our results, I prepared a new original figure, which removes any doubts about certification schemes and their sustainability.

In this time-series of high-resolution satellite images (1984-2014), I show a case-study of two certified palm oil concessions (whose evidence can be extended to the others that are part of our new full-length study). The pattern from deforestation to certification (both by RSPO and POIG), which we anticipated in our paper in the Science of the Total Environment journal, emerges unequivocally. In fact, the two certified palm oil concessions shown in the figure, located in the Riau province in Sumatra, were completely or almost completely primary and secondary forests in 1984 (the oldest satellite image that we were able to gather for the area). Then, from 1984 to 2014 (just during the last 30 years) these two areas proceeded, through a common pattern of deforestation, towards the achievement of RSPO and POIG certifications. The time-series satellite images clearly show the constant rate of forest loss (which almost completely matches tree loss!) during 30 years and the expansion of palm oil plantations into primary and secondary forest, before being certified as «sustainable» (one in 2009 by the RSPO and in 2015 by the POIG, and the other one in 2014 by the RSPO). Furthermore, satellite images show that the establishment of these currently certified concessions may have also facilitated (probably because of the presence of existing infrastructures, such as roads, mills, etc.) the establishment of new plantations in the surrounding areas, increasing — even more — the deforestation of the region.

Eventually, in the light of this evidence, my even more educated guess is that palm oil certification is just a smokescreen (a colossal fraud, indeed!) that, neglecting a recent past of deforestation, instead to increase forest protection, is allowing even more forest destruction. This evidence says that there is no reason to claim that certification actually improves the sustainability of palm oil and reduces deforestation. The opposite is likelier and the public opinion must not be misled to believe in fake environmental reassurances so it can continue to sustain the business-as-usual, veiled by greenwashing.

Quali le piante in via d’estinzione

«No alle biomasse a uso energetico»