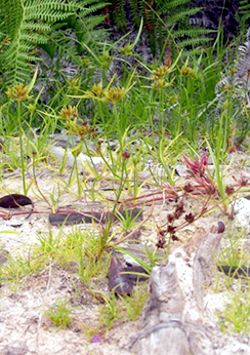 Recovery actions with the aim to conserve a rare and endangered species of European marshland is successfully undergoing in Italy. In Europe, Cyperus polystacvhius is a termophilous relict plant and is considered a species facing great extinction risk in the wild and it is listed as critically endangered (CR) according to the IUCN red list

The sedge likely original habitat, the marshlands of southern Italy, are in fact rapidly disappearing due to land change (i.e. housing and agriculture) and the species nowadays naturally occurs in all Europe only in two sites located south of Rome, in the Tor Caldara Regional protected Area and in the Ischia Island. In the region, before the «wetland drainage», which started effectively from the 1700, the spread of several species of sedges and rushes was common.

For these reasons a «rehabilitation project» was carried out, after a feasibility study, by Italian researchers with a joint effort of the Rome Botanic Garden, the National Protection and Research Institute and local conservation bodies.
Species recruitment limitations were investigated and a complex re-introduction project was undertaken.
Two new «ex situ» stations were established, one in the Protected Area of Decima-Malafede and one in the Landriana Gardens. Both locations are located within 40 km from the original germplasm source and inside the natural dispersal range of the «Tor Caldara genotype».
In addition a germplasm re-inforcement to the original existing population of Tor Caldara was carried out with seeds harvested from the first generation of plants of one of the new established station.

At present the re-establishment was successful however, warned the researchers, «in absence of post-release care and appropriate policy this conservation effort could be ineffective for the long-term survival of the species especially under increasing altered climatic events».

The report: Integrated conservation of the rare and endangered thermophilous species Cyperus polystachyus: investigation on recruitment strategies and short-term assessment of translocation