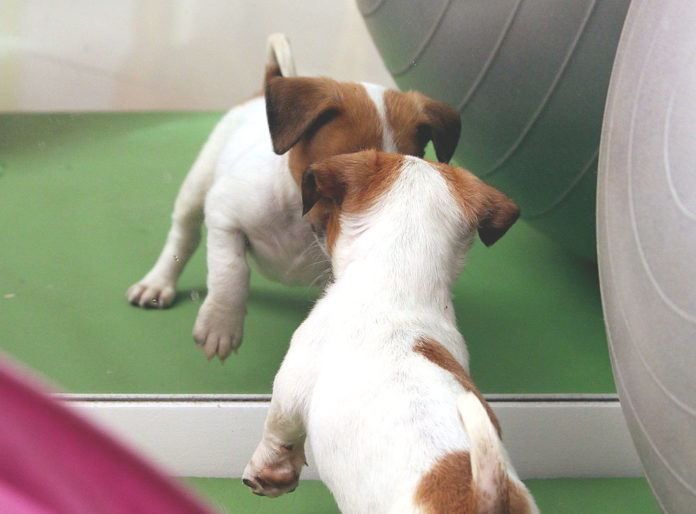 Dr G.G. jr Gallup and Dr J.R. Anderson recently published an interesting paper in Behavioural Processes entitled “The “olfactory mirror” and other recent attempts to demonstrate self-recognition in non-primate species” (Gallup & Anderson 2018). Generally, I agree with their criticisms. However, they were created by the gap in the scientific research created by the lack of appropriate reference and acknowledgement of previous tests and experiments, which have been neglected in the paper by Dr Horowitz that they criticize (Horowitz 2017).

The two authors discussed the kind of data that would be required to provide definitive evidence for self-recognition in dogs and other species and that the study of Dr Horowitz has not provided. This lack of evidence might be, at least partially, due to the absence of citation of the approach I used in a previous study that led to different conclusions (Cazzolla Gatti 2016).

In their review paper, Gallup & Anderson (2018) suggested, at least, two ways Horowitz (2017) would have followed to provide definitive evidence for self-recognition in dogs. The first one is (citing their own words): “Habituation to a familiar stimulus and dishabituation when that stimulus has changed is a well-established finding in many species (Nash & Gallup, 1976). Therefore it is entirely possible that dogs would show the same response to comparable changes in other familiar odors, such as that of another companion dog or even the odor of their owner/caretaker. Unfortunately, these important control conditions were not incorporated into the Horowitz study.”

Actually, this is exactly what I have already suggested in my previous study with similar control conditions to those suggested by Gallup & Anderson (2018), even if Horowitz (2017) has not cited them in her paper. In my research (Cazzolla Gatti 2016) I intentionally tested my original Sniff-test for self-recognition (STSR) on 4 dogs of different age and sex that knew each other (as a companion) from many years (minimum 3), because they were familiar with the odor of each other. The less time they spent to sniff their own scent in the tester and the more time to sniff those of the other companion dog, even if they were habituated to them, could represent a proof to what Gallup & Anderson (2018) suggested.

In my original paper, I wrote: “three out of four dogs tested in this study spent more time sniffing the blank than their own urine sample. One reason could be that they were completely uninterested in their own scent, but they seemed to expect to smell something in the control sample, even if it was blank, and so they checked more carefully.

[…] Moreover, the correlation between the age and the time spent in sniffing urine samples strongly supports the idea that self-recognition increases with age (Amsterdam 1972; Rochat 2003), as demonstrated in other species such as the chimpanzee (Povinelli et al. 1993). The evidence of an age-dependency in dogs’ self-awareness could also disentangle the ambiguity between “I-ness” and “mine-ness” because, for instance, puppies are well known to be aware of, and devoted to,

their own toys, baskets, bones, etc., so the minor interest in others’ smells by younger dogs could be more related to an age-dependent self-recognition than to the sense of “mine”.

[…] The greater interest of females towards the male’s than towards the other females’ samples, being statistically not significant, confirms that they were not consistently influenced by the scent of the other sex in paying more attention to others’ samples. In other words, their own urine samples were not ignored because females were much more interested in the male’s sample than in other individuals’ samples, but because each individual was aware of his own smell.”

Gallup & Anderson (2018) suggested a second way to provide definitive evidence for self-recognition in dogs (their words): “In the paradigm Horowitz used it is important to note that if dogs could identify the source of their own odor they should have attempted to smell themselves after sampling the canister containing their odor combined with another odor. If dogs did this it would be the olfactory equivalent to passing the mirror mark test since the novel odor represents an analog to the mark. But no such behavior was reported by Horowitz.”

Again, this behavior was reported in my original paper, even if Horowitz (2017) has not cited it. In Cazzolla Gatti (2016) I wrote: “A key difference between the STSR and MSR is that the latter considers the interaction with the mark apposed on the body of the subject as the confirmation of self-recognition. Evidently, with a smell this proof seems difficult to achieve (even if some chemical modification of dogs’ own urine samples could be tested in future), but when released together inside the enclosure and left free to move and interact with each other and with the five samples, the four dogs repetitively sniffed the excretory organs of the others and the containers, sometimes stopping to sniff themselves. [This] behaviour (the repetitive sniffing of the excretory organs of the others after conducting the test) could be difficult to interpret at this stage, but dogs seem to pay more attention to bodies (in general) after the olfactory test, like other animals (De Waal 2008) after having seen themselves or other individuals in a mirror (irrespective of whether they have been marked or not).”

By neglecting to mention prior evidence and mixing-up the results reported in my original paper by her idiosyncratic approach, Horowitz (2017) might have also misled Gallup & Anderson (2018)’s analysis, because the approaches suggested in their paper to provide definitive evidence for self-recognition in dogs were, at least partially, already shown in my paper. Gallup & Anderson (2018) concluded that: “at least in principle the olfactory mirror test may be logically more compelling than Horowitz realizes”. Actually, I was quite aware of the compelling logic of this test I invented and whose Dr Marc Bekoff (2001) and I, independently, built a theoretical framework. Unfortunately, this passed unobserved by Gallup & Anderson (2018) also because of Horowitz (2017)’s lack of mention.

Replicability and reproducibility is the basis of the scientific methods only provided that the researchers correctly cite the results of previous experiments and their authors and clearly states that they are either reproducing and replicating or improving and updating a previous approach to either confirm or confute its results. Unfortunately, this lack of literature background and the absence of a mention to previous tests and results in Horowitz (2018) also biased the review in Gallup & Anderson (2018).

Although not completely conclusive, however, I guess that my original study in 2016 had already provided, at least, some answers to the “kind of data that are required to provide definitive evidence for self-recognition in dogs and other species” suggested in Gallup & Anderson (2018) before the paper published by Dr Horowitz in 2017. The only addition made in Horowitz (2017), i.e. changing the dog’s own scent marking them with chemical or organic odors, is – in my opinion – misleading and in no way a possible extension of the mirror self-recognition test (MSR), as claimed by the author.

I originally tested the STSR on a small sample of dogs, this is why I suggested, in the conclusions of my article, to reproduce this test in future with more dogs of different ages. Replicating original findings in Cazzolla Gatti (2016) and the STSR with a larger sample of dogs and using additional controls, together with video-evidence, could represent a final proof of dog-self recognition, rather than a claim for not original tests and results is doing.

Bekoff, M. (2001). Observations of scent-marking and discriminating self from others by a domestic dog (Canis familiaris): tales of displaced yellow snow. Behavioural processes, 55(2), 75-79.

Horowitz, A. (2017). Smelling themselves: dogs investigate their own odours longer when modified in an “olfactory mirror” test. Behavioural processes, 143, 17-24.