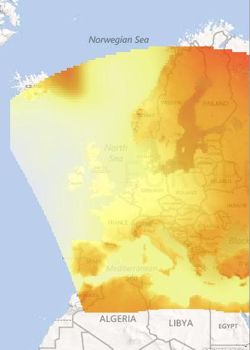 Records show temperatures have increased in Europe – but what changes can we expect to see in the future? Experts at the European Environment Agency (EEA) have produced a series of maps showing projected changes in temperature and precipitation for this century.

The maps have been produced in Eye on Earth, a global public information service which allows users to integrate many different kinds of information, for example combining different map layers.

Europe will be on average 1.5° C warmer in the period 2021-2050 than the period 1960-1990, according to the ensemble of regional climate projections from the ENSEMBLES project. The highest warming is projected over the eastern Scandinavia, and southern and south-eastern Europe. All areas of the continent will warm by a minimum of approximately 0.4° C and a maximum of 2.5° C, the projections indicate.

Looking further ahead to the period 2071-2100, the models predict that Europe will be on average 3 °C warmer than 1960-1990. In north eastern Scandinavia the temperature change could be up to 6° C higher than the reference period, while the Mediterranean basin and parts of Eastern Europe will also see much bigger changes than elsewhere. All areas are expected to see average annual temperatures at least 1.5° C warmer than the reference period.

Interestingly, there are great differences between summer and winter – the maps show the winters will see the greatest change in Scandinavia and Eastern Europe, while the biggest temperature increases in the summer will be around the Mediterranean.

While a few degrees increase may not seem significant, it is important to note that these are average annual temperatures, potentially masking large extremes. For example, during the period 2021 – 2050 summer in some parts of the Mediterranean is expected to be upto 2.5° C warmer than 1961-1990. Higher temperatures lead to an increase in number of heat waves and droughts, which have great impact on water supply, agriculture production and human health.

What does this mean?

Agriculture is extremely water-intensive in some Mediterranean countries, accounting for up to 80% of water use. These maps show that many countries will need to adapt their agricultural systems to deal with less water, or water at different times of year.

The climate change data behind the maps comes from 25 different Regional Climate models, run in the frame of ENSEMBLES project, under A1B emission scenario. This particular scenario assumes rapid economic growth, a global population that grows to 9 billion in 2050 and then gradually declines. Income and lifestyles converge across different regions, and new and efficient technologies are taken up. Energy is expected to come from a range of renewable and fossil sources.

It is important to note that this is just one scenario, so this outcome is not certain. By rapidly cutting emissions – for example by replacing fossil fuels with renewable energy technologies – the world could slow the pace of climate change, and the impacts seen on these maps could be much reduced.

But Europe will also need to adapt. The EEA and the European Commission recently launched Climate-ADAPT, a web resource aimed at policy makers and ‘practitioners’ – engineers, planners and administrators – who can learn from the experience of others facing similar challenges already carrying out adaptation actions elsewhere. Climate-ADAPT includes the maps featured here and a wealth of other information.