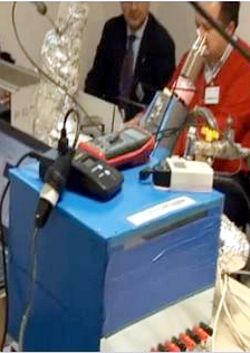 The record of some protagonist and fans from Fleischman e Pons, to Rossi e Focardi trough Preparata

Gianni Degli Antoni (GDA) met prof. Focardi many years ago. He was a young lecturer at the University of Milano dedicated to helping young people to acquire skills in computer science. As a physicist, he loved physics. At that time (early 70) Jobs in Physics were only few. And then GDA tried to make himself useful otherwise. Prof. Focardi managed a BSc degree course in information science at Cesena, near Bologna. He invited (GDA) to hold the first lesson to the students of the first year of that course, in the start-up phase.

Since then, many years have passed, GDA followed as the external observer the scientific efforts of prof. Focardi, in his attempt to explain anomalies energies of Nickel-impregnated of hydrogen. The phenomenon was known since 1936, but few people including Focardi, had taken it seriously.

In the same time research on nickel, and other the so called cold fusion, has always been ignored and considered as a bad science by a part of academia.

Fleishman, also one of the initiators, together with Pons, the of the so called cold fusion. Fleishman was aware of the phenomenon. He described to GDA some aspects personally. Since then he decided to abandon nickel for palladium impregnated with Helium.

In the case of Nickel , the phenomenon in its external aspects was evident. The nickel, in particular conditions, warmed and maintained its heat for a long time. The absence of academic theoretical explanation induced many to ignore the whole thing though reported by Focardi and others. The phenomenon was not reproducible, at the beginning. So the applications were of little interest. That phenomenon was in the line of the production of heat which many dreamers, also inspired by Prof. Giuliano Preparata, envisioned as a solution to the energy problems of humanity, as an alternative to fossil fuels and nuclear reactors. This theoretical work is now continued by prof. Yogendra Srivastava of Perugia University and Allan Widom of NEU of Boston.

Next to the judgment on bad quality on those researches there was also a certain hostility for research into cold fusion, perhaps driven by dark feelings which do not exclude the reality of those dreams.

However, many scientists insisted in those researches, frequently hidden and meeting with many difficulties. The funds devoted to that theme were very limited and certainly not driven by a lobby similar to other fields in the world of research and development.

In Italy, there were a few scientists who have worked on those themes. Their perseverance however gave example to many initiatives even around the world. The results of those researches , were publicized only by some newspapers as “infinite energy” New Energy Times and Villaggio Globale.

Needless to say that the lovers (we are among those) and experimenters and theoreticians were steadily discredited. Nevertheless, the lines of research were many, often geared to build an image for the academic sector. Cold Fusion at the bottom who had wanted to win a place in the Academy as well as to give the site a new fire that was proposed as an inexhaustible and free of waste of any kind.

The belief of many was that the nature of the abnormalities were nuclear energy source or consequence of the fragmentation of the nuclei of atoms with associated emission of energy. But, how could the nuclei break, or, in the language of physicists, nuclear reactions were like? The problem was of greatest scientific interest also, but denied by most of the world of nuclear physicists for reasons clearly well understandable.

In fact, to break up the nuclei destroying their internal balances is, in some sense, you might say, earthquakes, whose consequences is energy emission some “bomb” is needed. That is a well-known phenomenon in the world of Physics of stars (even on the Sun) and in research laboratories. The bombs that could penetrate into nuclei are neutrons, particles as large as a nucleus of the hydrogen atom, but with no electric charge. Being neutral, neutrons can overcome the electrostatic barrier which makes it impossible to penetrate the positive charges in the nucleus.

In order to obtain energy there is the need many neutrons for breaking many nuclei. Who generates those neutrons, in Nickel? Nickel has a metal structure (crystalline). Certainly the hydrogen loses electrons scattered in nikel. But the results are only positive charges that are rejected by nuclei, and only at temperatures of hundreds of millions of degrees, could produce a nuclear reaction!

Thus emerged an issue still much discussed and with a variety of explanations, still not accepted (Srivastava and Widom among others), have a possible one!

Here a good engineer (Andrea Rossi) could make reference to a system view in order to conclude that the phenomenon could be used to produce energy through breakdown of atomic nuclei induced by the presence of hydrogen in nikel, accepting some explanation on the existence of the phenomenon. The experimental evidence of production of energy form nuclear reactions is, and was, out of any doubt!

It was necessary to break up the nuclei without resorting to the phenomena known chain reaction in nuclear engineering. It was appropriate to introduce the correct substances, prepared in such a way as to be in intimate contact with the produced “neutrons”. There, the temperature would be increased as consequence of the nuclear reactions! A flow of water while warming could maintain under control the temperature, and the flow of hydrogen. Thanks so the fate of the Rossi Cross and Focardi, the fire of Prometheus was turned on, as in a candle where the wick Burns slowly and absorbs the wax!

Now is the time of wisdom. And the context is more difficult for all: The fire of Prometheus promises energy without emission of carbon dioxide, it is certainly possible to its industrial reproduction (already started in Greece and USA). That fire produces no waste. The few radiation are stopped by lead screen similar to that which protects radiologists in hospitals. The electricity it produces easily since the heat produced. Many roads open… really many.

You can well understand that the world of the fossil fuels, conscious of the need of new energies as a consequence of the perception of the limits of oil resources, could be worried by the appearance of a new energy, and unavoidably continue to believe in those people who negates the underlying phenomenon.

Now, the energy exists! Some consequence must be taken –

-For example, you might suggest to stop the development of biofuels that use agricultural land. Incentives of those activities may be directed to installations for the production of energy with the new fire of Prometheus.

The United Nations has already taken a strong position against the replacement of goods with the production of biofuels, in a situation that, you know, is leading many in the world, to hunger.

-You can design as the gradual replacement of fossil fuels ,with these new sources of energy. This attitude could lead to a strong reduction of potential conflicts in the world.

-You can evaluate the result of the availability of energy on the desalination of water, with the possible reduction of wars for the future control of water resources.

Goodwill is needed. United Nations can carry out their utopian mission: enlighten the Prometheus fire to prevent violence.

Intellectuals must understand that a serious engineering based on Science and ethics, wisdom can dream of humanity, for a return of beauty.

And to those who believe that it is impossible, it might be worth noting that the same result can also be obtained for other routes. Culture will be the starting point. The word ‘ culture ‘, however, cannot be used only by those who believe to possess its control. Culture is the defense of all. And is a world heritage resource.

This note is the result of many attempts to understand the economical crisis, its causes and the opportunity to contribute to its reduction.

An immense gratitude goes Italian scientists that have encouraged others to make a new page in the world. Observers scientists and fans, like some of us, can now say: I was there!

2) This note was initiated by one of us (GDA) and completed with strong cooperation by the others.